During the Dutch Design Week on the 27thof October 2018, Eduard van Vliet was guest speaker at Studio Juul Rameau. He gave an interesting lecture about connecting man and nature and how plants contribute to the climate issues of today.

“Greeneryis becoming increasingly scarce, especially in urban areas despite the fact, and this has been proven, that it has a calming effect and allows people to perform better.” Plants contribute to climate issues of today. “You have to imagine that the temperature on a roof can rise to 80 degrees. Green cools. Plants also retain particulate matter and built-in water buffers ensure that rainwater is drained away in a delayed manner. ”

In short, in his plans and elaborations of designs, the human being is central but nature isalways essential.

We have forgotten that the plant has been on earth for a longer time than we have and the plant has given the earth the opportunity for humans to live on this planet. It provides photosynthesis and therefore ensures oxygen and CO2 reduction. Without this, there is no life possible on this earth.

The plant has the same 5 senses that man possesses: Seeing, Hearing, Smelling, Feeling and Tasting. They have developed these in a different way but they are just as reliable. But they have also developed other senses. They feel and calculate gravity, electromagnetic fields, humidity and can analyze the concentration of all kinds of chemical substances. They also have a highly developed social interaction with their wider environment; with plants, insects, fungi, bacterial species and animals.

We can understand and examine all of this and draw conclusions from it, and that makes man the most highly developed being on earth.

That is why it is important that we reconsider the plant and assigns its place in our living environment both outside our gardens and urban areas, but also in our homes and offices.

Another look back at the Dutch Design Week in 2016 where Green Art Solutions was also involved!

The Dutch Design Week was a great success, not only because of the large number of visitors, but especially because our Tiny TIM was spontaneously visited on the first day by Constantijn and Laurentien. Apparently, a royal spark was then transferred to Vila Eikenhorst. The (almost) full Tiny TIM Team was therefore extremely surprised when Queen Máxima visited on the 25thof October!

She showed genuine interest in our completely autarkic concept and was interested in the history of the Tiny Tim, designed by architect Jurgen van der Ploeg. The green water-purifying wall of Eduard van Vliet did not escape her attention either, and her questions showed us that she had prepared herself well. Too bad we could not offer her a glass of purified water.

The Dutch Design Week was from 22 to 30 October in Eindhoven and there was a brand new Tiny TIM on the Ketelhuisplein in the middle of the old Philips factories. This time we have built a completely new interior, so that we can make even better use of the space. This has been possible thanks to the guys from StudioNuance. They specialize in designing a multifunctional interior so that you can make even more use of every square meter. 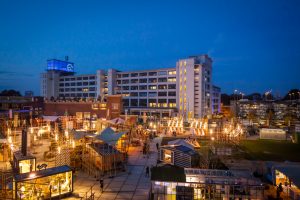